Two of my client engagements with Buildit required a large scale front-end style guide and UI templating. I identified a good candidate in Fabricator. It got me most of the way there with a flexible organization scheme and ability to build whole pages from mock data. Also it is very hackable. Across two projects, I pushed Fabricator to its limits and, with a front-end teammate, we partially rewrote a large section of its internal engine. See discussion on my Enterprise E-commerce project At the end of the two engagements, I knew I needed something more to move forward.

We were able to add page navigation, building Sass variables, and more robust specimens to a forked Fabricator. However, other limitations were fundamental to how Fabricator works. I collaborated with my teammate Zach Metcalf to create a tool from the ground up. I served as product owner and UI designer/developer. Zach M handled the Webpack and Node side of the app.

After some experimentation with Vue.js and a variety of templating languages, we settled on a custom Webpack build process with Handlebars (kept from Fabricator).

We built Tenderwolf to be data agnostic, it can accept JS files or JSON files. This makes the sky the limit as far as mock data. Particularly the introduction of faker.js could have saved untold time I spent rolling my own JSON files.

Further, materials (atoms, molecules, etc.) now can have default data (think default props in Vue or React) defined in front matter. Consider a button, now the text can be set as a default rather than having a if statement. The downside is that we had to create a custom helper (include), rather than using the standard partial import syntax (which works in other situations).

For debugging purposes, all data is readable in a console log during development.

Fabricator includes rudimentary color specimens built from JSON data, but my projects required a more robust data-driven approach. Based on JSON data in the project (see below), Tenderwolf calculates color values in alternative representations (i.e., RGB and HSL) from a Hex code and accessibility values for white and black text to meet WCAG AA requirements for large and small text. Further, tenderwolf pushes the hex code to a Scss variable partial that is accessible in the project. Unlike Fabricator, where you would need to define color variables twice, Tenderwolf allows the JSON to be the source of truth for documentation and coding. 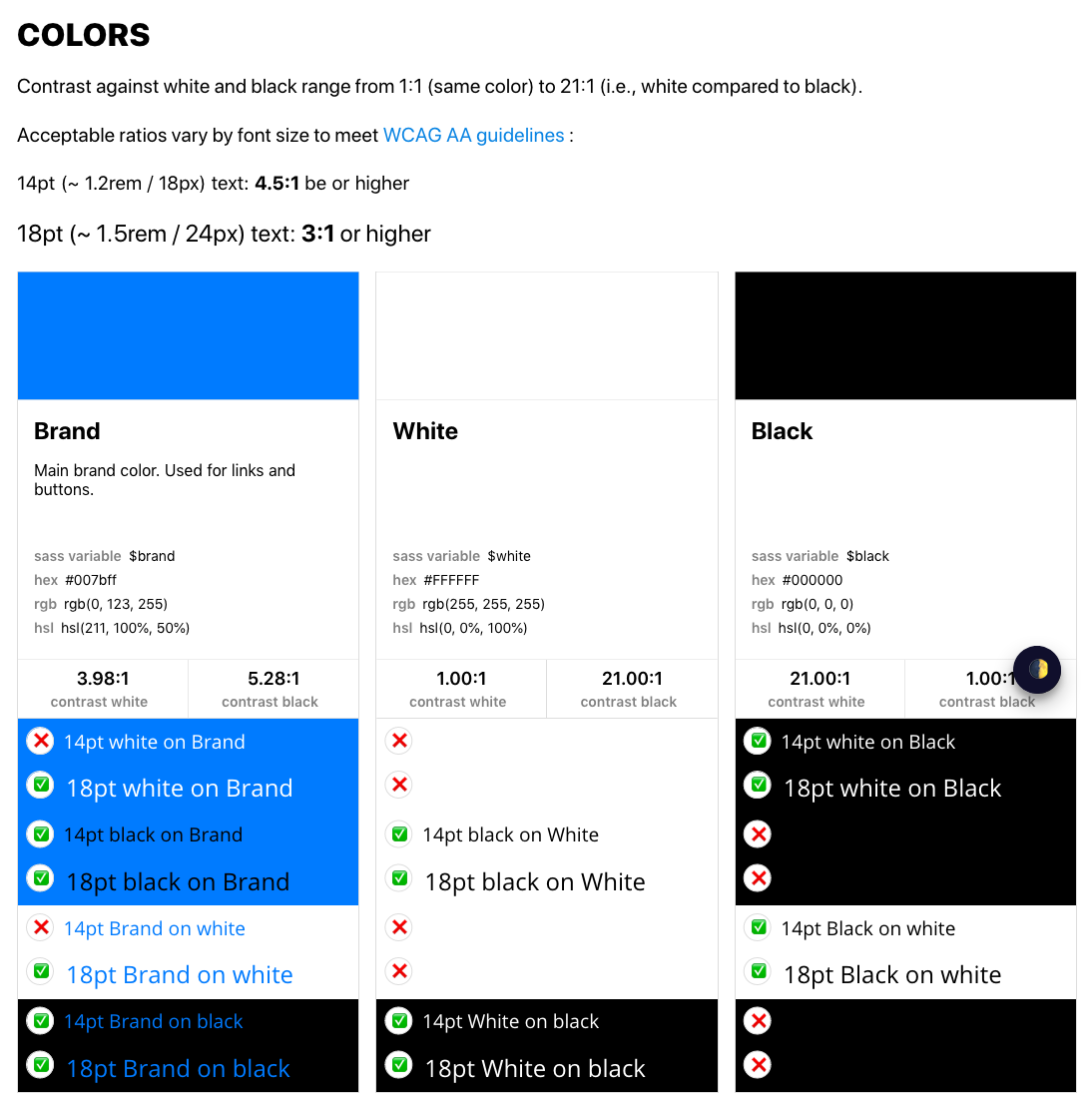 Further, Tenderwolf also allows specification of specimens for typography (headings, paragraphs, etc.), borders, logos, and breakpoints. All are rendered on the styles page and pushed to Sass variables for use in the project. This is relatively extensible, so other specimens could be created in the future. Additionally, arbitrary Sass variables can be defined in the project, if so desired. 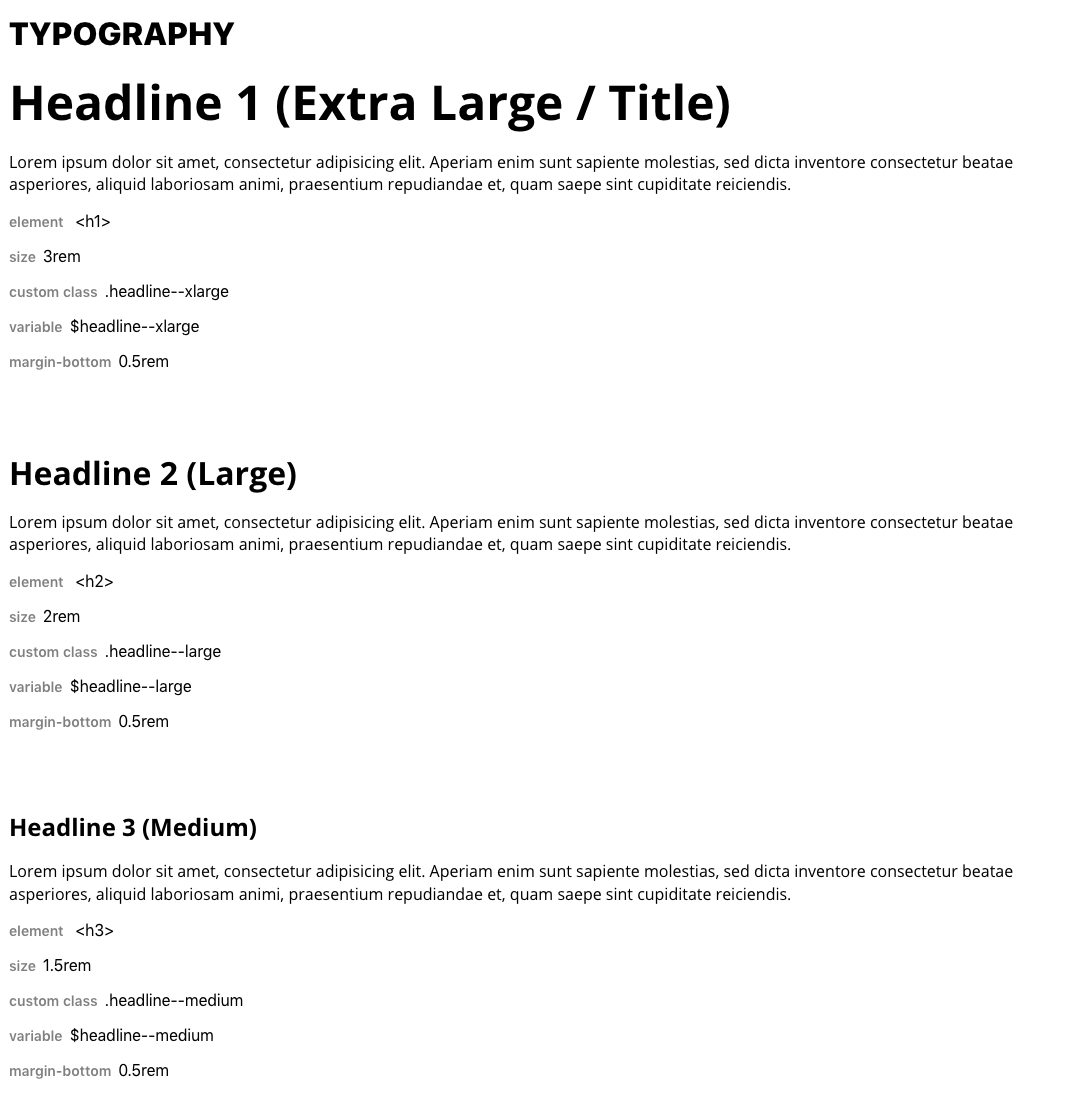 Tenderwolf builds a directory of SVG files into an optimized sprite file. For browser support, svg4everybody is included. Icons can be accessed through the <use> pattern. A library of all icons is rendered on the styles page.

This allows flexibility of both layout and includes for pages.

Tenderwolf borrows the directory driven navigation from Fabricator, but extends its organization to be more flexible for large projects. Materials directories can have as many sub-levels as needed: 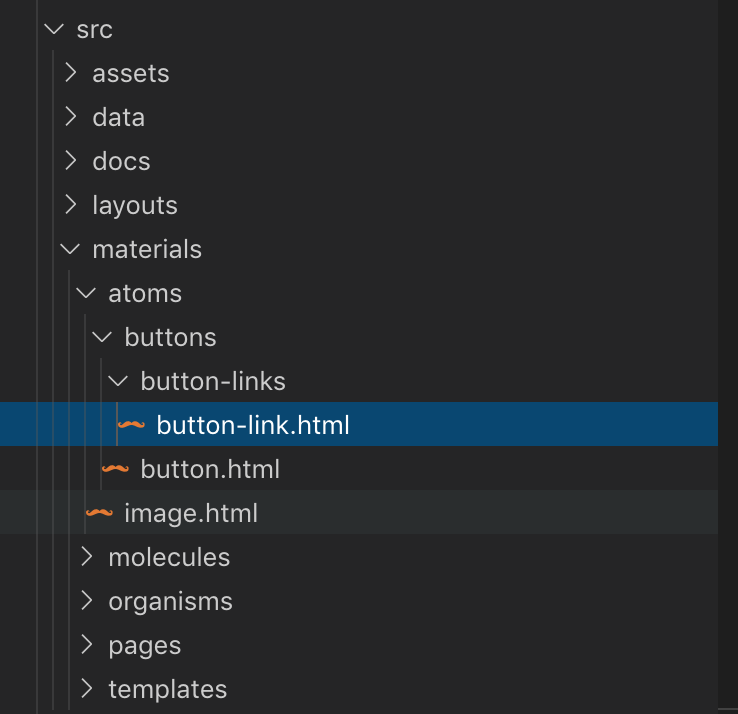 For instance, Atoms / Buttons / Button Links will render its own page.

The top level navigation reflects the directories in the materials directory (our starter uses standard Atomic Design categories. If one were to do a scaled back Atomic Design or entirely different organizational scheme, Tenderwolf can support it.

The core CLI build tool for Tenderwolf lives in a separate repo from individual projects, so that the CLI can be updated and version independent of projects that use it. We created a starter project to speed development, so the CLI tool will be imported as a NPM library rather than having to fork the entire repo as with Fabricator.

The separation posed some challenges around error handling for mock data. Initially we assumed all specimen data would exist in the project, but once I started deleting JSON data, the build breaks. I went through and hardened the CLI to have sensible defaults and fallbacks when specimen data is not available.

I hope to open source Tenderwolf for interested parties. There will need to be some additional hardening, finishing, and documentation work to get it ready for primetime.